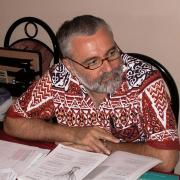 It is in 1982, during the creation of the SNPG (Popular and natural knowledge of Guadeloupe) at Marie-Galante, but after IMEPLAM in Mexico and CEMAT in Guatemala (1975/76), against the backdrop of the premises of the environmental crisis discovery and the international calls for the preservation of the biodiversity, that TRAMIL was created. It just goes to show that great ideas come along, certainly because the need for such initiatives was obvious!

Four entities came up together to create TRAMIL: the Faculté de Médecine et de Pharmacie de l'Université d'Etat d'Haiti, the rural clinic of the SOE at Thomonde in Haiti, the federation of peasants’ associations of Zambrana-Chacuey and enda-caribe in Dominican Republic.

During the first two years, these entities have established the ‘philosophy’ of the project and conceived the methodology, carrying out the first ethno-pharmacologic surveys following an original procedure to which the MNHN (National museum of natural history) of Paris participated via Mrs. Alice Peeters.

When we had to exploit our results attempting to validate scientifically the numerous significant uses, we quickly realize that the resources in Universities laboratories of the island of Hispaniola would never suffice.

That is the reason why we decided to propose to different persons from the Caribbean basin, known for their interest and/or researches in the field of medicinal plants, to take part in our program.

To do so, we have organized a first TRAMIL workshop at the end of the year 1984, mainly financed by the WHO and the UNESCO, in order to set forth our project, to share our first results, and above all to invite the researchers of other countries to take part in the project. Somehow, 1984 does not correspond to the foundation of TRAMIL but to the ‘foundation of its "caribbeanization" if I dare write…

Fortunately, and for a positive change of scale, the vast majority of the guests have accepted to take part in the project, and to this day either these persons or the institutions that they represented keep participating or at least supporting TRAMIL.

As a reminder and by countries in alphabetic order (without mentioning again the two founding countries nor the Europeans that were at the workshop), the guests were:

With hope that nobody has been forgotten…

Some words from one of the co-founders of TRAMIL and manager of the website:

From the creation of TRAMIL in 1982, one of our priorities was to carry out a public health work directly useful to the population with which we work in the first place, but also intended for a wider audience at a mid-long term plan.

Initially, we could barely use one of the first commercialized personal computers, but the technologies have rapidly evolved and we tried to take advantage of them to reach the goal of broadcasting our results.

This is how, thanks to FUNDERES at first and later to the libraries of the University of the Antilles (UA), we have been able to create a trilingual, scalable and free to everyone TRAMIL website, in order to better share the ethno-pharmacological knowledge gathered by our network during these 35 years. In particular, disclose the principal medicinal plants of the Caribbean basin and their scientifically validated significant uses.

We remain opened to external input, particularly iconographic ones, but also to constructive criticisms.

A common participant during the first TRAMIL meeting in 1984, the UAG has since been fully involved in the development of the francophone section of the TRAMIL network. In addition, the UAG organized the 6th scientific workshop in Basse Terre in 1992 and co-published in 1995 a key work, "Towards a Caribbean Pharmacopoeia."

Since 2002, the support of the UAG has been reaffirmed by the signing of an agreement that permitted, among other things, to welcome to Dr. Lionel Robineau, the scientific coordinator of the applied research program and to incorporate him to the laboratory of Plant Biology, then in charge of Professor Jacques Portecop.

It was only logical that the Joint Service Documentation at UAG took the initiative to provide Caribbean students and researchers, whatever their working language, the results of the research carried out by researchers from around the Caribbean.

This interactive database is a goldmine of information on Caribbean cultural habits in primary health care with medicinal plants. Let's bet that our students will develop the desire to deepen our knowledge of regional ethnopharmacology.